I’ve upgraded my desktop to windows 8 lately and since the upgrade I’ve noticed that each time the computer enters sleep mode or hibernation it keeps turning on my itself mysteriously and no apparent reason.

Well…no more!! Here’s the actual line of events that led me to the solution:

Only after being frustrated again from the computer still waking up with no apparent reason I’ve noticed that it keeps waking up at around specific times, which led me to the conclusion that it’s probably a schedule task that was waking the computer up !
Seems like there is a Media Center task names mcupdate_scheduled that was causing all the trouble ! 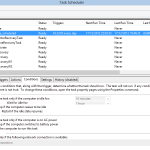 So, I’ve written a small PowerShell script to disable the “wake the computer to run this task” option from all scheduled tasks at once, and that did the trick!
This script should work fine with Windows 8 or Server 2012 and might serve as an example for manipulating scheduled tasks with PowerShell.

Now my computer sleeps and hibernates without waking up ! ZzzzzzzZzzzzZzzzz

Hi Again, due to popular demand, here is my small RBAC “knowledge base”, this should apply just fine to Exchange 2010 and Exchange 2013.

Hope you find this information useful !

I’ve recently had an unusual situation I wanted to share. A client of mine had a geographically stretched Exchange 2010 DAG cluster that crashed really bad, the original “active” servers had been lost beyond repair… luckily the databases were replicated to another location, so the data was saved. In addition the client was in between a migration from Exchange 2007 to Exchange 2010 (the 2007 servers were not effected from the disaster..).

Just for the sake of explaining a little more, the original “active” servers should have been restored with the setup.com /m:recoverserver , but due to the nature of the failure those servers and their names are gone and were no longer required. Those failed Exchange 2010 DAG member servers were completely deleted from Active Directory using ADSIEdit.

To recover the Exchange 2010 environment I’ve done a few steps, following which the Exchange DAG was online and service was restored.

Following the actions above, service was restored, and all was good, until we encountered an issue with users located on the Exchange 2007, they reported that they could not retrieve any free/busy information from other users (which were all located on Exchange 2010 databases).

A quick troubleshooting showed that configuration was fine (URL’s were set correctly, networking access was fine, permissions were okay etc..), so I’ve enabled the troubleshooting log on an outlook client while logged on as an 2007 user. Looking at the xxxx-xxx-AS.log (availability service logs) generated from outlook, I was able to extract the root cause:

I’ve wrote a small PowerShell script that helps update the values for all affected users using a LDAP filter and the Get-User cmdlet from the Active Directory Module and the Set-Mailbox -ConfigurationOnly cmdlet.

Use this script on your own risk, make sure to always double check your self before running on a production environment.

Make sure you modify the LDAP filter $filter and the MBX2 per your configuration.

The conclusion from this case was very interesting to me, the scenario we had here was a “typical” cross site activation of an Exchange 2010 DAG, but due to the nature of the failure, we were forced to re-home the mailboxes as if we were using Database Portability! (excluding the actual database change of course). See the links below for more about Database Potability.

My good friend podlisk has finally got his blog up and running, check out the script for this highly required task for Exchange 2007 / 2010 🙂

Shay Levi (MVP) has posted yet another great PowerShell tip,

this time he blogged about how to modify the EmailAddresses property ( which is actually a MultiValuedProperty ) with powershell 2.0 new capabilities, making adding an additional or removing an email address from a recipient a snap!

Since Exchange 2010 was released I always run into this request from administrators and help desk personnel:

“I want full access to all mailboxes, and also to all future mailboxes too ! uh and new mailboxes in new mailbox databases too !”

The following commands will do the trick, copy the first row separately- Exchange 2010 only:

And remember with Active Directory permissions an explicit allow overwrites an inherited deny. so this will work even if you do this to an admin user / group.